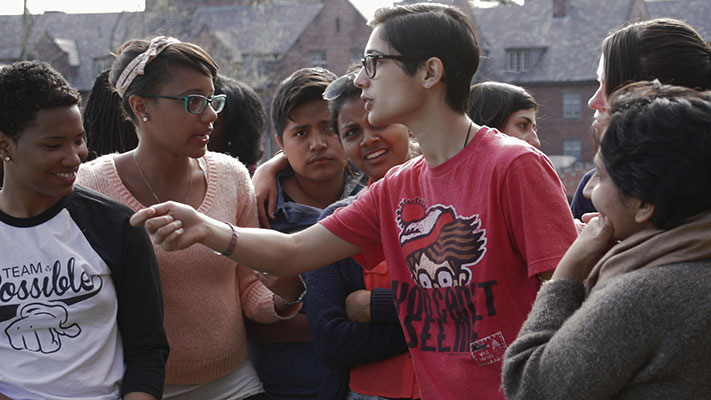 Sharon Hayes: Ricerche: three is organized by the Eli and Edythe Broad Art Museum at Michigan State University and curated by Alison Gass, Curator of Contemporary Art. Support for this exhibition is provided by the MSU Broad’s general exhibitions fund.

Blurring the traditional language of documentary filmmaking and the broader visual and narrative freedom of the realm of video art, Sharon Hayes has come to the artistic forefront in her consistent investigation of the way language and speech function in relationship to broad issues of politics and identity, both personal and collective. This single channel video installation premiered this year at the Venice Biennale and is inspired by Italian director Pier Paolo Pasolini’s seminal film, Comizi d’Amore, 1963—a documentary work in which people from all social backgrounds are interviewed about issues of sexuality. Ricerche: three trains a more focused gaze on a unique sector of American educational society that elucidates notions of the developing identity of young people from around the world and their relationship to norms, expectations, upended traditions, and progressive expressions of freedom in gender politics and sexual identity.

In this work, Hayes is seen engaging in a generative and fluid conversation (part interview and part free dialogue) with 35 students who are enrolled in an all women’s college in western Massachusetts. Hayes has noted that the space of single sex education in the United States is intriguing to her in its balance point position between archaic notions of feminine safety and propriety and its actual condition of extremely progressive sexual expression. Given the highly diverse student population in terms of both nationalism, sexuality and even gender fluidity, The work broadens out from this small Massachusetts site and this small group of students to elucidate a global condition of gender identity and experience. Hayes has a unique ability to quietly site the personal within the collective and look at the way each of us must continually navigate the many groups with which we identify—suggesting that ultimate freedom may finally develop through the ability to navigate these collectives with a strong ability to see ourselves in context.