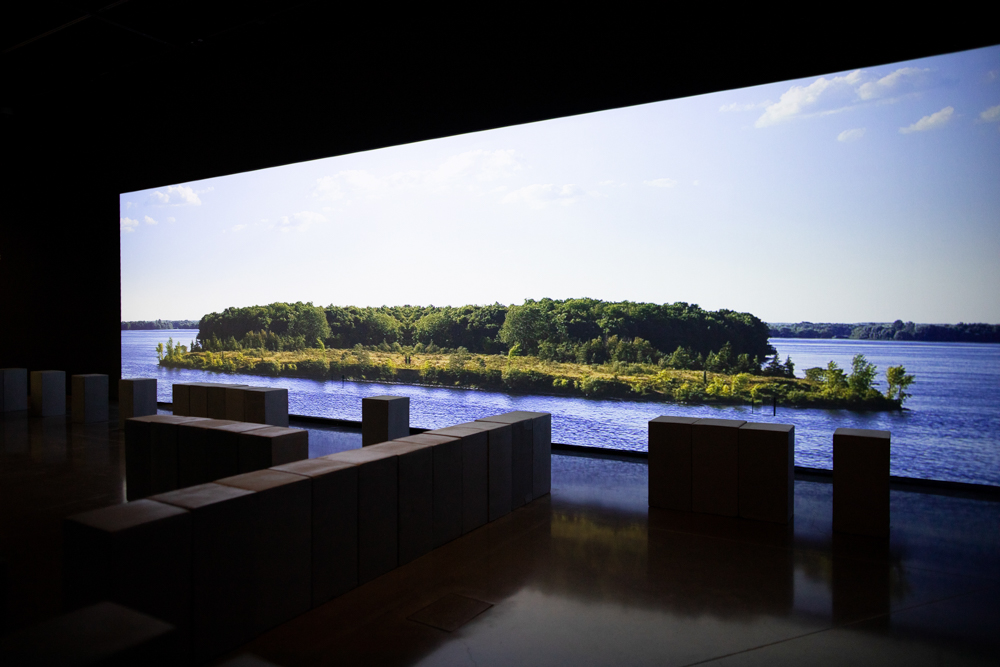 Caroline Monnet: Bridging Distance documents artist Caroline Monnet’s twenty-two-day voyage by cargo ship across the Atlantic Ocean. Monnet grew up between Quebec, Canada and Brittany, France, and positions the Atlantic Ocean as a middle ground, a point of cultural and spiritual contact, between her Algonquin and French ancestries. The film and sculptures on view challenge the colonial organization of land, bodies, and time, pointing to the ways in which geographies and languages are simultaneously formed and disrupted in “middle” spaces. By complicating the notion of identity and borders, the exhibition reminds us that Michigan is sited along a colonial border that divides the ancestral, traditional, and contemporary Lands of the Anishinaabe.

The film Transatlantic, shot by Monnet aboard the ship, maps a personal journey and follows routes of colonial movement and economic exchange between Europe and North America. The film begins and ends at industrial ports on either side of the Atlantic, but the imagery within defies a linear narrative: it oscillates between descriptive shots of scenery and industry and abstracted expanses of waves and sky. The audio is composed of morse code and jamming radio signals, emphasizing the ways in which more open, undetermined modes of communication can bridge vast physical and psychological divides. The exhibition additionally features a series of concrete block sculptures that form the word “distance” in morse code across the gallery floor. In conversation with the film, the sculptures materially and symbolically reconstitute the space of the Atlantic Ocean, engaging viewers as participants in the Transatlantic journey.